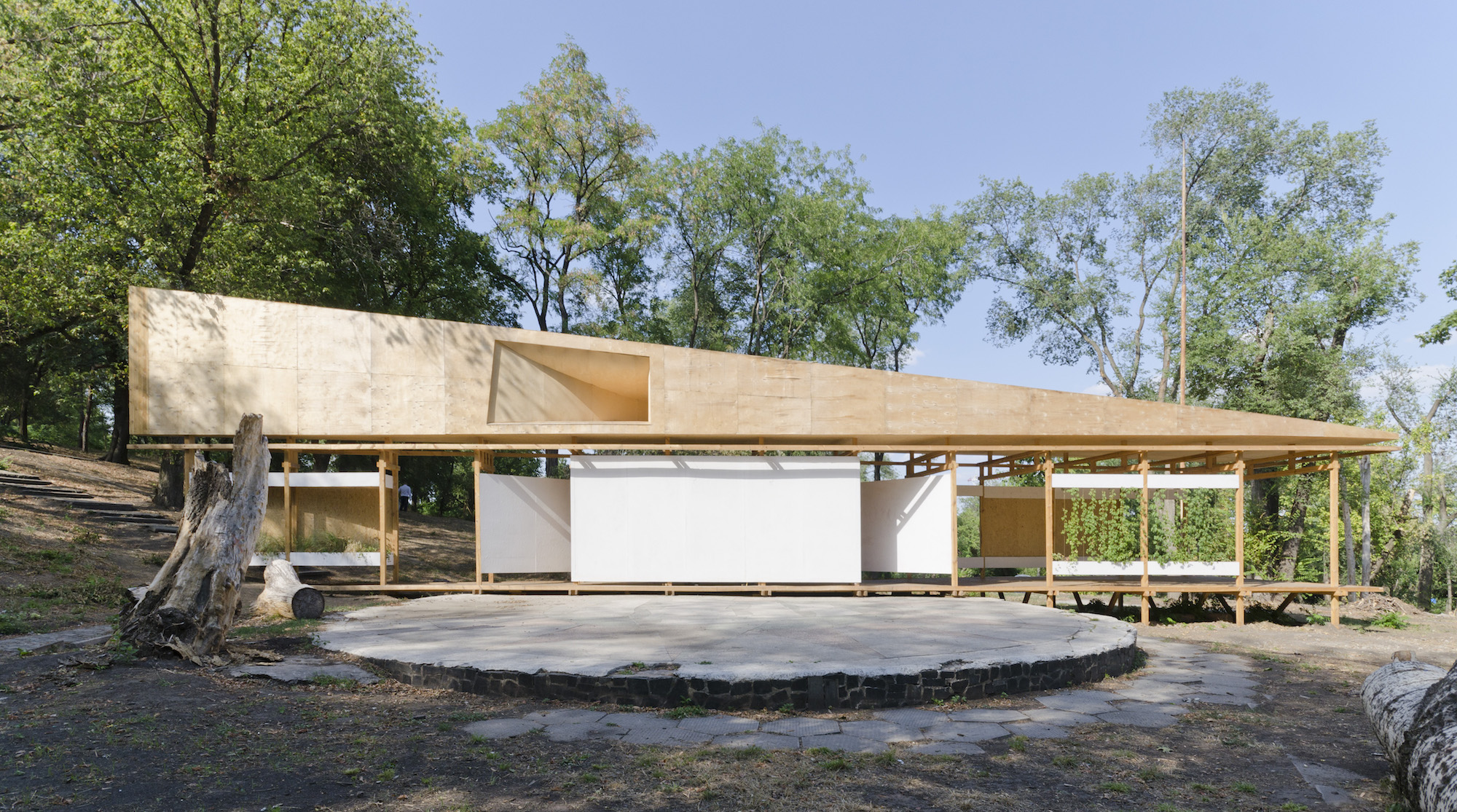 Several cultural groups of musicians, poets, and visual artists organise to carry out a temporary renovation of a Stalinist-era amphitheatre in the city’s central park by means of crowdfunding, collaborative design, and “self-construction” teamwork.

With almost a million inhabitants, Dnipro (Dnipropetrovsk until 2016) is Ukraine’s fourth largest city in terms of population and the country’s leader in technological development, thanks to the strength of its machinery and aeronautics industries. In fact, during the almost thirty years of the Soviet era, Dnipropetrovsk, which was often called “Rocket City”, was totally closed to foreigners because it was home to the top-secret Yuzhmash facility, a major ballistic missile production centre. Today Dnipro is an open city of vibrant, transgressor culture. Spontaneously, more or less randomly, dozens of groups of musicians, visual artists, poets, architects, and illustrators tend to occupy the abandoned spaces scattered the length and breadth of the post-Soviet city, giving them new uses and senses.The old centre of Dnipro lies on the right bank of the Dnieper River, one of Europe’s largest. Not far from the river is Taras Shevchenko Culture and Leisure Park, an important green lung for the city. Inside the grounds, a semi-circular hollow testifies to the disappearance of an amphitheatre. This is the last vestige of a 1930s Stalinist facility, an open-air, summer theatre with considerable audience capacity. It was entirely made of wood, and was therefore reduced to ashes in a devastating fire during the Second World War. In the 1970s, perhaps in a tentative attempt to restore the propaganda functions of the theatre, a circular concrete slab was laid in the centre of the curve defined by the amphitheatre. 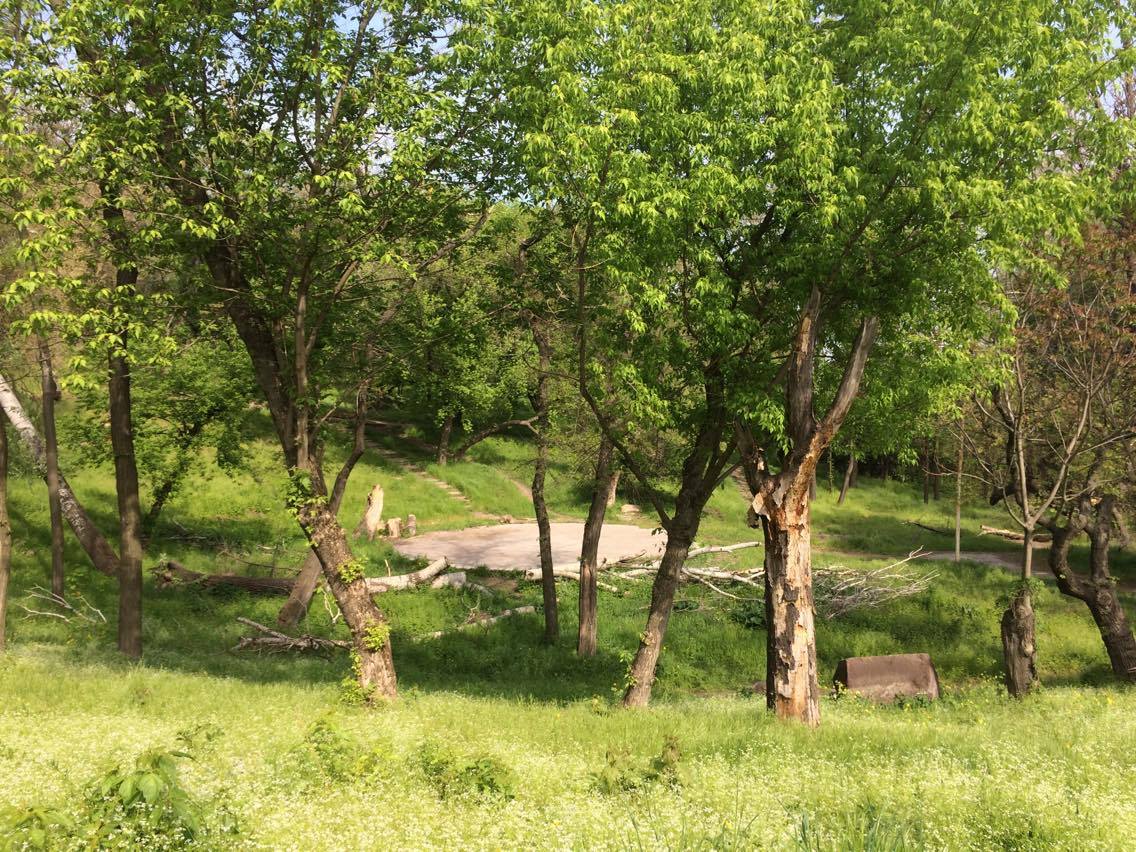 Aim of the intervention

In 2017, the old theatre of the Culture and Leisure Park became a candidate for occupation by some of the city’s cultural groups. The excuse was reactivating the cultural function of the place, but the main aim of the project was to revive the rich, diverse network of social and artistic movements which had gelled three years earlier with EuroMaidan. This wave of protests and civil unrest calling for more democracy and integration into Europe had resounding ramifications in Dnipro where tens of thousands of EuroMaidan supporters demonstrated. Under the auspices of the non-profit organisation Kultura Medialna—which, since 2013, has brought together musicians, artists, designers, architects, and cultural managers who are concerned about contemporary art, technological innovation, and urban matters—these cultural groups made an open call for ideas in order to decide collectively the best way to appropriate the site of old theatre. This time, rather than occupying an existing space, the plan was to reconstruct a stage which no longer existed. The starting point was agreement that the restored meeting place would not reproduce the propaganda exercise of the old Stalinist theatre but that it had to be a catalyst for critical reflection and open debate using different formats of artistic and cultural expression. It all began with online crowdsourcing which raised 7,500 euros but, rather than obtaining funds to finance the project, the main aim was to recruit activists for the cause. 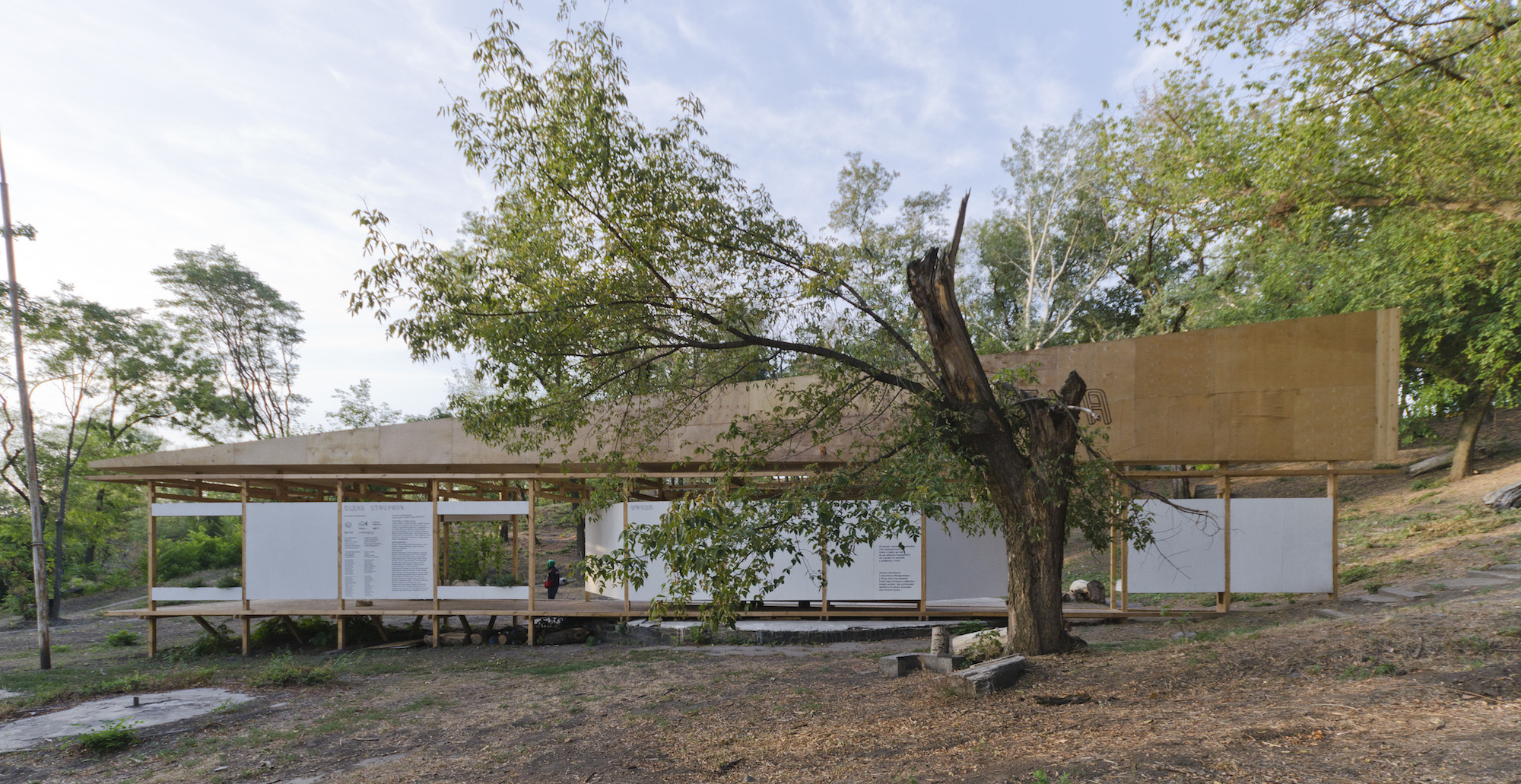 The project of the temporary stage for the amphitheatre in the Culture and Leisure Park was fruit of an online process of collaborative design. Architects, engineers and artists worked together online drawing up plans and writing the construction specifications. The activists started collecting tools, buying materials and organising brigades to clear the ground and get to work. The three months required for constructing the stage presented a perfect occasion for building a mechanism of social cohesion which then engendered a new community. The stage was conceived as a temporary, reversible construction that was to have lasted just one summer season, after which it would be completely dismantled. For all its ephemeral character, the construction openly displayed the group’s determination to take possession of the place.Constructed over the circular concrete slab, the stage consisted of a long level backdrop, crowned by an angled “acoustic tube, similar to those in old gramophones” to amplify sound. Used to support a large screen for projections, the backdrop concealed a space some three metres wide with storerooms and a backstage porch with river views. The structure was made of small pillars and solid timber beams, and closed with plywood panels. All the construction elements were brought together in situ and in the act in a DIWO (Do It With Others) self-construction process in which the brigades of activists acquired new skills as they worked with professionals and industrialists from local supplier companies. The intervention was decorated with plants ceded by the Dnipro’s Botanic Gardens. At the end of the summer, after having presented some sixty events democratically programmed by the self-managing community, it was decided that the stage should remain in the park until the next season. If the authorities do not remove it, the activists will replace the plywood panels damaged by the harsh winter weather and correct defects in the design which were revealed by using the space. 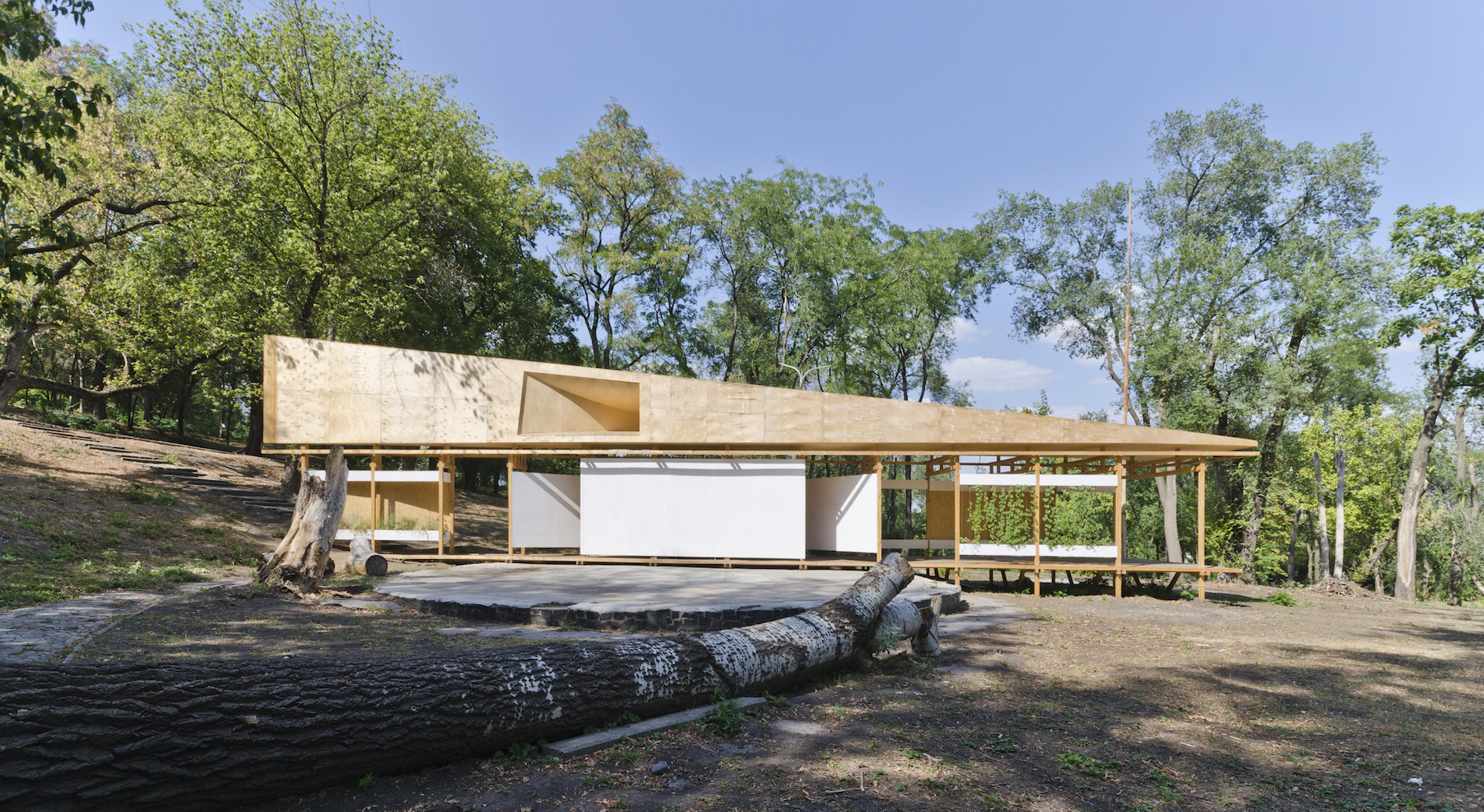 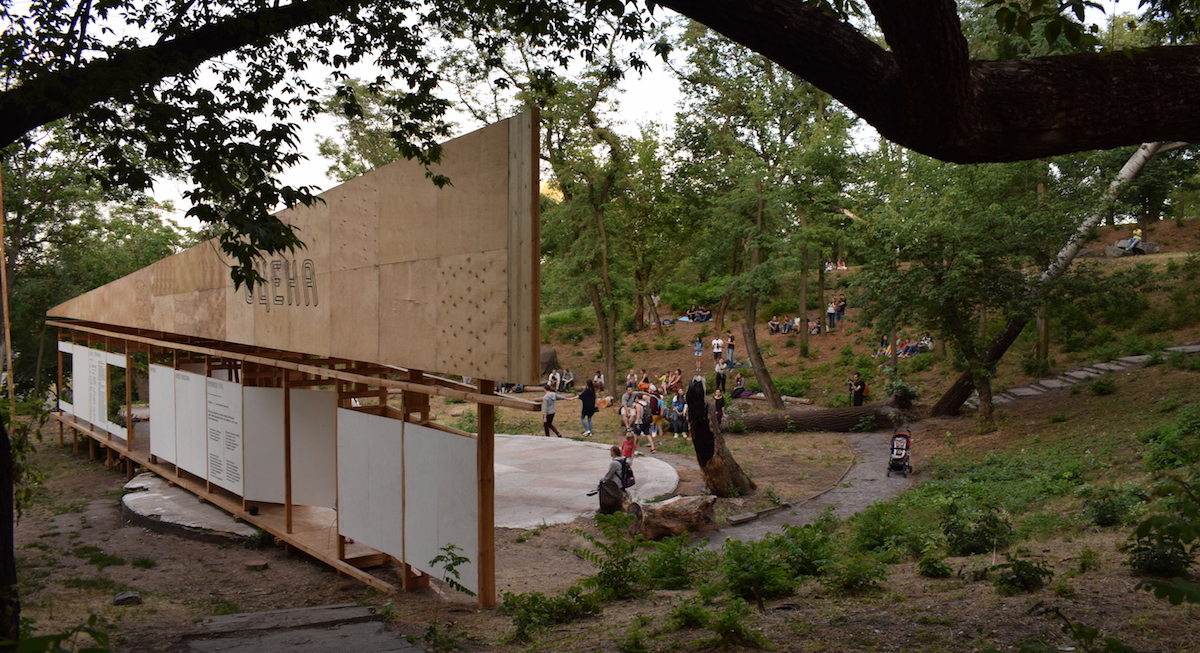 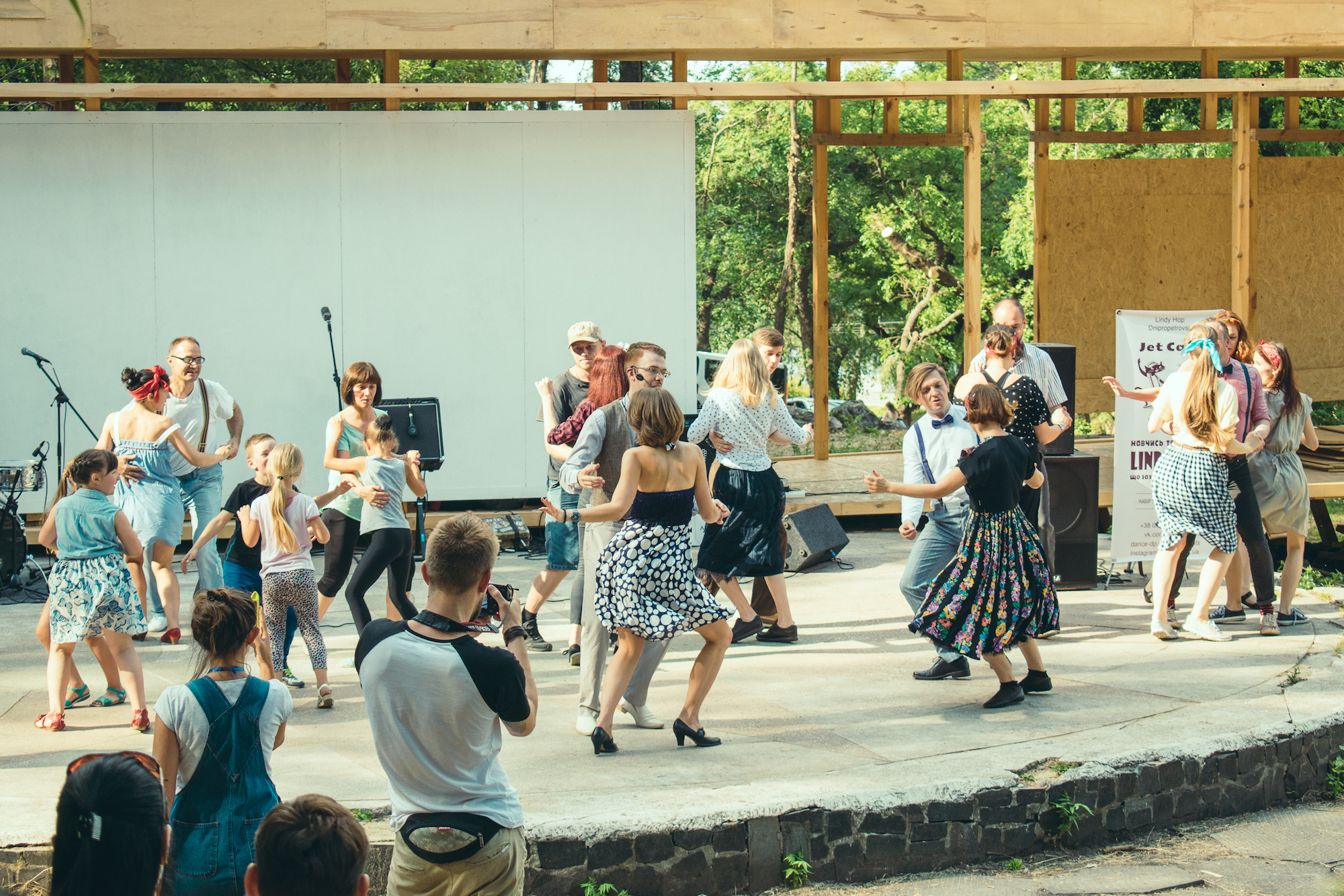 Until the end of the 1980s, tens of thousands of highly qualified machinists, engineers and scientists worked in the Yuzhmash missile factory which, officially, kept up appearances as a factory producing tractors and kitchen appliances. The workers and their families, making up more than half the population, were bound to secrecy about its real production which was essential for the Soviet Union during the Cold War.Today, Dnipro is no longer a forbidden city where knowledge is kept under wraps and politics secluded at home. The temporary stage in the Culture and Leisure Park has demonstrated the existence of a big demand for cultural facilities with innovative practices and alternative activities. As a statement in favour of self-management and co-production of meeting places for social interaction, the experience bequeathed by the stage is confirmation that Ukrainian civil society is ready to rethink the uses and values that the authorities allocate to public space. Controversy is on the cards. As we wait to see whether the theatre will be respected and whether the lesson has been noted, there can be in no doubt that change is in the air.